What Is the Way to Study Abroad from Nepal?

As can be seen, the number of Nepali students moving abroad for further education is rapidly increasing. This is a boon for the country as long as the students use the abilities they learned in their native country. Students are increasingly opting to pursue their degrees in foreign nations, and this trend is expected to continue. Student mobility is beneficial to the country in and of itself. Students are transferring more as a result of globalization. This tendency is unquestionably beneficial to the nation's human resources.

What are your thoughts? Is Studying Abroad in the United States, Australia, Canada, or Europe Beneficial or Detrimental?

Due to a lack of quality education and universities in Nepal, a big number of Nepalese students apply and move overseas for higher education on a daily basis. One wonderful option to enrich your mind with knowledge, positive vibes, and new experiences is to study abroad. If your college or student life is dull and lackluster, you might choose the finest spot for you to study abroad.

You can contact Prasana International Educational Consultancy, which is not only a center for providing educational techniques to students searching for jobs abroad, but also a business center and a popular study abroad location for Nepalese. There are a variety of options for Nepali students looking to study abroad. The United States, Australia, New Zealand, Germany, Cyprus, Japan, Korea, and others are among them.

Every year, the number of students studying abroad grows. The number of students studying abroad has risen dramatically in recent years. Easy access to foreign nations, increased public knowledge, and a lack of preferred courses of study in Nepal are some of the causes behind this. Students now have simple access to foreign places because many countries have widened their visa clearance policies.

Why Do Nepalese Students Prefer to Study in Foreign Countries?

Nepalese students who prefer to study overseas rather than in Nepal have a lot to do with the limited lifestyle and limited educational alternatives available here. Quality education, hands-on experiences, permanent residency, post-study job policies, access to technology, and more are all critical considerations.

On the other hand, choosing the right destination might be difficult. There is a lot for students to think about, from finding the perfect programs for their higher education to meeting admission standards and immigration needs. As a result, Nepalese students interested in studying abroad will benefit from this comprehensive post.

What Are the Top Four Study Abroad Destinations for Nepalese Students?

As the search for better education and a better lifestyle continues, an increasing number of students are choosing to augment their higher education by attending institutions and universities abroad. Australia, the United States, the United Kingdom, and New Zealand are among the most popular destinations for Nepalese students. 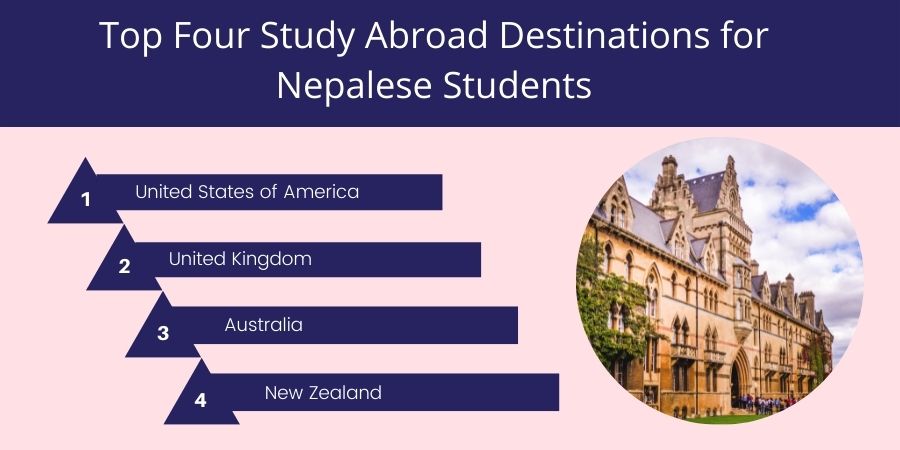 Study in the United States of America

With over 800,000 international students opting to enhance their education and life experience in the United States, it has the world's largest global student population. Nepalese students who wish to study in the United States can apply for various scholarships. America has many possibilities ranging from the most expensive to the most economical universities. That is most likely why it is a popular choice among Nepalese students.

If you're still undecided, consider the following arguments why the United States is one of the top choices:

Popular courses in the USA for Nepalese students

We're all aware that Australia is the most popular study abroad destination. And the number of students coming to Australia has only increased in recent years. The key reason for this is that Australian universities are ranked among the best in the world. Furthermore, Australia is a suitable choice for students because of its readily blendable atmosphere. Students can work up to 20 hours per week and their studies. On the other hand, any student can apply for a two-year post-work visa after completing their degree.

Learn why Australia was and continues to be one of the top choices for those wishing to pursue higher education abroad:

World-class universities: Six Australian universities made it into the top 100 list of the Times Higher Education's World University Rankings 2021, out of a total of 37 universities.

The highest-ranking of all was Melbourne University, which came in at number 30. The University of Sydney and Australian National University, on the other hand, are just outside the top 50, ranked 51st and 59th, respectively. Queensland is ranked 62nd, with Monash University 64th and UNSW Sydney 67th.

Cost-effective education and living: Studying in Australia is a less expensive choice for students. Australia's average tuition fees are lower than those in the United States and another similar study abroad countries. As a result, Australia is a financially stable alternative for international students.

Work while you study: Australian immigration laws make it relatively easy for students to work while they learn. International students are frequently eligible to work in Australia through a straightforward procedure. Students are usually allowed to work for up to 40 weeks each year. The rules, however, may differ. 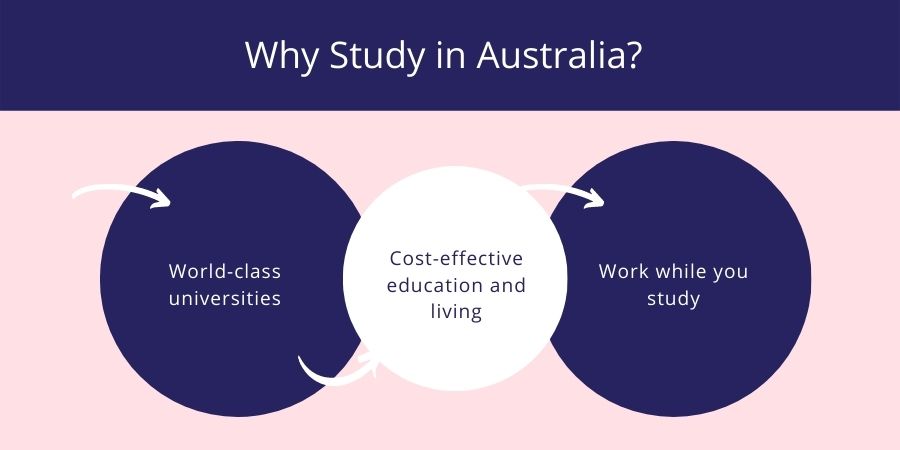 The fact that New Zealand is the world's second most tranquil country is one of the reasons why the number of international students studying there grows every year. It is also supported that all eight state-funded universities are in the top 3% of global university rankings.

Students are also drawn to study in New Zealand because of has flexible entry standards and continual intakes, with admissions available virtually all year. International students seeking Bachelor's and Master's degrees can also apply for prestigious scholarships in New Zealand.

Were you aware that all 8 New Zealand universities have been ranked in the QS World Rankings 2018?

Minimum and Achievable Criteria: New Zealand universities have shallow entry requirements. Students with modest passing marks can readily get accepted into bachelor's, master's, and postgraduate diploma programs.
In addition, there is no age limit for enrolling in a New Zealand institution.

Reasonably priced tuition and living expenses: New Zealand is an excellent study abroad choice for Nepalese students seeking a higher standard of life and cheaper living costs. For many courses, lower annual tuition rates and a low cost of living make it easier for overseas students to manage their finances. 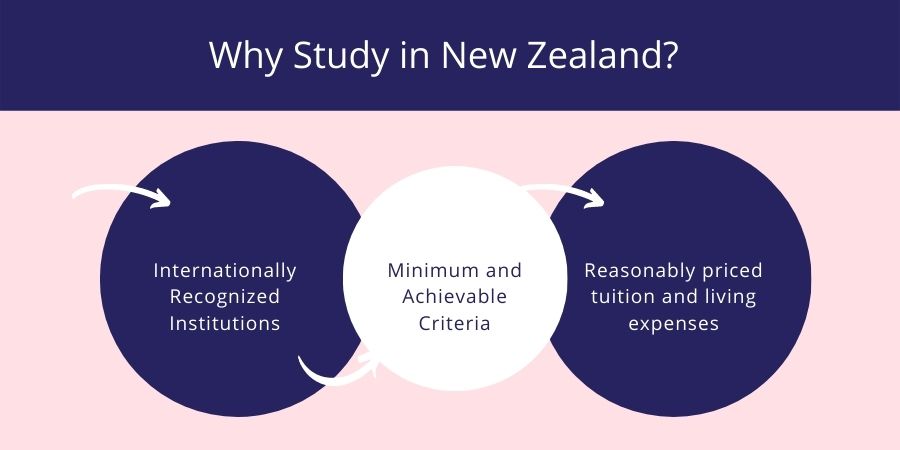 Study in the United Kingdom

Universities in the United Kingdom have a long history of academic distinction and quality. With a plethora of course possibilities, the United Kingdom has become home to over a million international students from all over the world. Aside from theoretical values and experiences, the UK offers students the opportunity to obtain a great deal of value from the one-of-a-kind experience it provides.

The following are the top three reasons to study in the United Kingdom:

One-year degrees: In the United Kingdom, most postgraduate courses run only a year, making them shorter than in many other countries. Master's degrees are notoriously tough to complete, yet colleges in the United Kingdom allow students to grow while honing their talents.

In a similar vein, you don't need much money to apply for a visa to study in the UK; only £16,000 is required, compared to US and Australia.

Popular courses in the UK for Nepalese students

Still, have concerns or questions about studying abroad? Prasana International Educational Consultancy is here to help you with that.